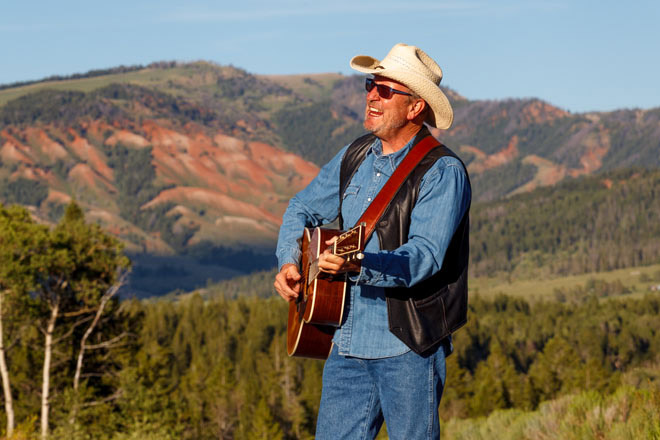 Known as the Global Cowboy, Brent Moyer loves exploring the broad perspective of human experience, as he lights the fire of imagination while weaving stories across a wide open musical landscape.

From the wild west of Wyoming he embraced Nashville. Brent Moyer either had a guitar in his hands or a trumpet on his lips. A Berklee College of Music alumni, he has played guitar for Country Music legend Lynn Anderson, and was a cast member in the hit Broadway Show, Ring of Fire, the songs of Johnny Cash.

Moyer has recorded 12 albums of original material, and his songs have been covered by artists in the U.S. and Europe. As a producer and an in-demand studio musician, he appears on a number of CD’s.

We talked with Brent Moyer about his song “Tennessee Tears” and his approach to songwriting, being a session guitar player in Nashville, and success in Europe with his own records.

How did the idea of the song “Tennessee Tears” come to you?

I grew up in Wyoming and when I first got to Nashville in the mid-80s, I met Bernie Nelson—who had also spent some time in Colorado and Wyoming—and we became compadres. It’s been so long since we wrote the song but I remember we somehow started singing the phrase, “Nobody knows why, Cheyenne Rose cries, Tennessee Tears”—and we liked it. We both had that wide open feeling of the West, and the story unfolded from there.

What is your creative process for writing songs?

It varies. Mostly, it’s a musical groove but sometimes I have something to write about, and I build the song around that. I try to find feels and sounds that meld together. Being in a special place or a mood can bring on feelings that can evoke a musical groove and idea.

Is it ever done? Don’t be afraid to keep working on it. Explore every option. Sometimes that can take a while. I had been working on a song “So Not Me” with Casey Kelly (who wrote George Strait hit “The Cowboy Rides Away”) for a few years as our schedules permitted. We had written several drafts, and then when we thought we had it—it turns out we liked some of the earlier ideas better. So we rewrote it again, and finally put it to bed after 5 years.